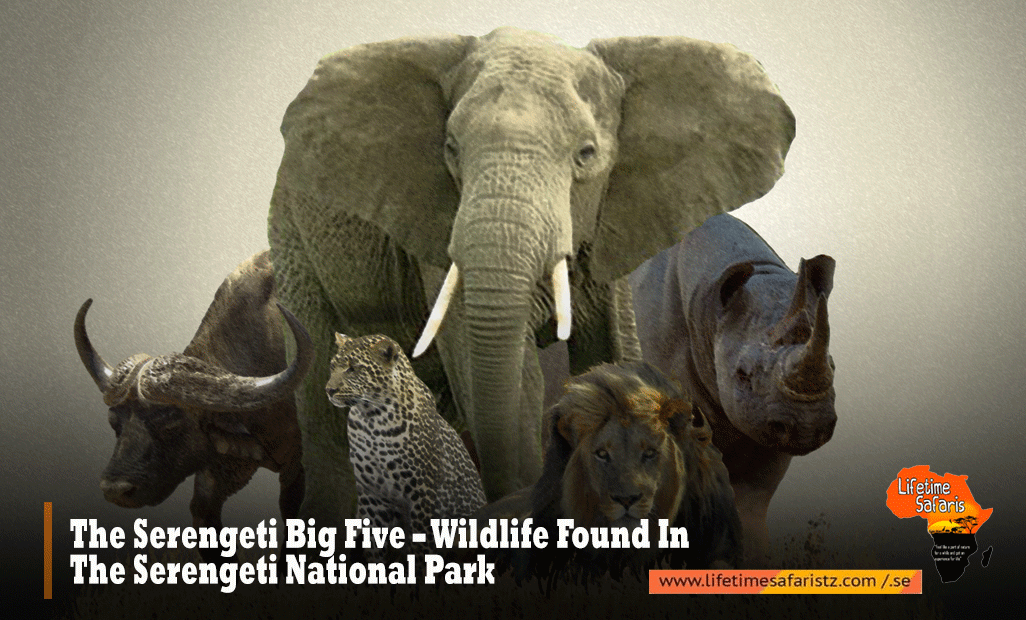 There is just so much to see and discover on a Safari Tanzania. The Serengeti has a great variety of animals, because of its great diversity of vegetation and habitats across the park.

The Serengeti National Park is a favorite spot for hippos and crocodiles. It’s also famous for its predators. You can expect excellent lion and cheetah sightings, exciting lion kills, and leopards that are also regularly spotted. Other predators include golden and black-backed jackals, African wild dogs, and spotted hyenas.

Seeing the Serengeti big five is the ultimate African safari experience. The term ‘Big Five’ was coined by big-game hunters and is not derived from the size of the animals. These animals proved to be the most difficult to hunt, mostly due to their ferocity when cornered.

The Serengeti National Park has all the big five in huge numbers. But rhinos are rarer than they used to be. They are mostly found in the northern part of the Serengeti near the Maasai Mara national reserve.

Lions are the Kings of the African savannah. Seeing the pride of lions in their own habitat will leave you with an indescribable feeling and memory.

The Serengeti National Park is home to some incredibly large pride of lions and they are fairly easy to spot. Lions live in pride because they’re very social animals. In a group, the females hunt more than the males.

Their favorite activity of lions is snoozing under a tree: something they can do for about 20 hours a day!

Leopards are the shyest and elusive one of the Big Five. They are excellent at playing hide and seek. If they don’t want to be seen, they can be perfectly camouflaged.

In the Serengeti, you can spot leopards resting on a tree branch. If you’re on a Serengeti National Park Safari, never forget to look up. A leopard might be enjoying his lunch high up in a tree, so lions and other predators don’t bother him.

The buffalo is one of Africa’s most dangerous animals with very few predators.

Buffaloes need to drink water every day, so they are often found at a waterhole. They are notoriously bad-tempered, especially when they’re injured.  They are known for their ‘They look at you like you owe them money. This is what makes it thrilling to see them.

In the Serengeti, buffaloes come in very healthy numbers. There’s a good chance you’ll see herds of them with over 1,000 or more numbers of these animals.

Elephants are the world’s largest land animal, and seeing one in its natural habitat simply feels very thrilling.

In the Serengeti National Park, these grey gentle giants roam the plains and then disappear into the woodlands. Female elephants live in close-knit clans and their family bonds can last for nearly 50 years. The male elephants often leave the clan after 12 years to roam alone or form bachelor herds.

Elephants frequently visit waterholes close to lodges. They are peaceful when left alone, but if an elephant feels threatened, it can become very dangerous. I’m sure nothing scarier than being chased by an animal that weighs 7,000 kilos.

The rhino is a pre-historic heavyweight, weighing in at 2,500 kilos. The rhino has a horn that’s worth more than its weight in gold, which is quite unfortunate. Over the past several decades, the rhino population in the Serengeti ecosystem has suffered greatly due to poaching.

Rhino numbers have decreased from 1,000 to less than 70 individuals. The female rhinos only give birth every five years. This makes them one of the rarest animals to spot in the Serengeti National Park.