Spaces To Stay To Witness The Great Wildebeest Migration 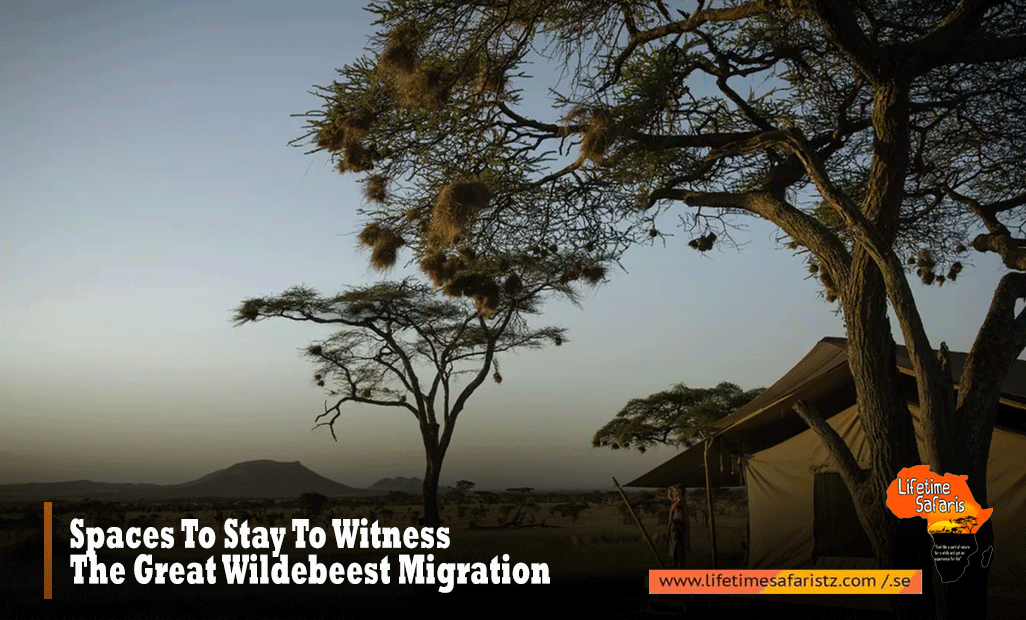 Serengeti Wildebeest Migration is one of the world’s most dramatic wildlife events in the world.  Almost around two million wildebeest use to head journey from the plains of the Serengeti in Tanzania to the Masai Mara in Kenya. In quest of greener grasslands and more overflowing waters. There is certainly accommodation you must find out forsee the migration. As the migration lasts the whole year and follows a cyclic agenda.  Serengeti Wildebeest Migration Safari probable to witness the endless herds at various points during the journey.

Tanzania Safari Tours is the best place to visit in order to see this most magnificent migration.

One of the most interesting points of the wildebeest’s drive is when they cross the river, Mara. Standing at the lip of the bank, entire herds rapidly cascade downwards to the river, flinging up of dust.

August and September months are the Best Time for Safari in Tanzania to see these spectacles. Basically in this time of year, the dry season is narrowing its grip on the land – forcing the wildebeest to make Tanzania Safaris.

The Plains of the Mara Reserve

The remaining wildebeest are still huge to cross the river actively. The Great Plains of the Masai Mara expect the arrival of wildebeest. Their return for living far expect plenty of lavish green grass and fresh water. Both in good stream results in the rain showers that begin in September and October.

After the departure from the lush plains of the Masai Mara, the wildebeests turn back towards Tanzania, following the rain. The grasslands of Ndutu, in the northern piece of the Ngorongoro Conservation area, are where they relax from around January to February. And give birth to their young. In a month around 500,000 calves get born, increasing the already vast herd.

When To See The Wildebeest Migration

The Great Migration takes all around the year for a complete single cycle. You can able to see the mega-herds throughout the year in terms of Best Time for Safari in Tanzania. But because the animals cover huge reserves, certain highlights only occurs in specific months:

Calving (Birthing) Season can watch out from February to March in Southern Serengeti. The Rutting (Breeding) Season can clearly get captured by April – May within Western & Central Serengeti.

Choose the Accommodations for Clear View of Wildebeest Migration

You have chosen the accommodation wisely by searching and enquiring with your tour operator. You should take any lodge or campsite, it is important to have a close accommodation to the way of wild beast migration. You can easily get it if you go accordingly to the time and the position of wildebeest in that period. There are certain things to notice while choosing the time and accommodation for Tanzania Safari Tours.

If you really wondering to enjoy the biggest wildlife showcase.  It will better to have accommodation near to Mara River. Or the lodges or camps are just in between the Serengeti National Park. Choosing the right accommodation will help you to easily drive for watching Wildebeests.

The Great Migration is a whole year journey and the general Mara river crossings cannot be foretold. Sometimes the wildebeests stay put for a couple of weeks, other times they cross four intervals in one day! Choose from a variety of especially well-appointed rooms, suites, and lodges that are packed with every individual comfort imaginable. For more information about heading for wildebeest migration connect with us now @Lifetime Safaris