WHEN IS THE BEST TIME FOR SAFARI IN TANZANIA? - LOW SEASONS OR HIGH SEASONS?

Are you guys planning to have extreme fun in Tanzania but confused about the Best Time for Safari in Tanzania? Then do not worry about it as we are here to help you out in finding the right answer.

Tanzania encounters thousands of visitors who come there to the serenity of nature along with the fierce wilderness. As the Tanzania Safari Tours is a dream for all the savvy travelers, it should be an extremely adventurous trip for you. So choosing the best time for your safari plays a vital role.

When To Go To Tanzania on Safari

Whenever you plan for somewhere the first thing you do is deciding the time. Similarly, when you make your mind up for the Tanzania Safari Tours the first thing that you should decide is When to go to Tanzania on Safari?

Tanzania delivers warm days and cool evenings throughout the year. The coastal areas near the Indian Ocean and the lakeside gives a warm and humid climate while the mount Meru and Mount Kilimanjaro region face a cold climate. Generally near Kilimanjaro temperature goes below freezing point.

There are two seasons mainly: the rainy seasons and the dry seasons. Rainy seasons include March to May (long rains) and November to December (short rains). During these periods you will face a lot of difficulties in your safari life. So we recommend the dry weather as the Best Season To Visit Tanzania for the Tanzanian safari.

If you want to visit the Zanzibar beachside party during your Tanzania Safari Tours, then July to March is the perfect match for you. The weather remains dry during this period too which creates a clear safari view and enjoyable safari life. These months are considered as the Best Month To Visit Tanzania.

Why Should You Go Tanzania In Low Seasons?

Though low seasons throw many challenges in safari life, there are some advantages too. Let’s have a glance at the advantages of low season Tanzania Safari listed below.

Due to less demand for the Safari In Tanzania during the low seasons, the price of maximum hotels goes down. The hotel staffs try to deliver the utmost hospitality to you as there is less crowd in hotels.  From the cost point of view, low seasons can be the Best Time For Safari In Tanzania.

The nomads who are going to frame the Tanzania wilderness in their lenses, then low seasons can be proved as the best one. The vast ecosystem in Serengeti gathers the massive clouds under which the unleashed beasts keep playing creates a mesmerizing view. So from a photographer’s point of view, low seasons are the Best Time To Visit Serengeti National Park.

How The Cost Is Affected By The Low Season?

The biggest advantage of the Tanzania safari is the reduction of the safari cost. Keeping this point in mind, this is the Best Time for Safari in Tanzania. These factors are responsible for low Tanzania Safari Cost.

Decreased price in the hotel tariffs

Due to decreasing demand, the airfare may face some price drops.

No need to book a year advance as low season faces fewer visitors.

Maximum availability of the safari crew, because of a small number of visitors.

High Cost During The High Seasons:

High season faces a huge demand for the Tanzanian safari. This season includes June to October period. During this season all the hotels and camps become full. So if you are planning a Safari To Tanzania you have to book a year advance. The followings are the factors that cause a surge in price during the high season.

Due to high demand, hotels increase their tariffs.

Most of the camps and tents become full. So for camping, you may have to bring your camping requirements.

High traffic in Tanzanian safari causes less availability of safari vehicles. So you may have to adjust in vehicles or you can hire a personal vehicle that adds to your total coast.

Why Should You Go Tanzania In High Seasons?

According to most of the people, high seasons are the Best Time For Safari In Tanzania. Due to its soothing and comfortable weather, it encounters huge traffic of visitors. There are many advantages of traveling to Tanzania Safari in High seasons.

The days are cooler and free of humidity which makes the perfect condition for a comfortable safari life.

It becomes easier to find the game activities of the Tanzanian beasts. High seasons offer a fair chance to witness the game of the predators catching zebras, deer, etc.

A day walking safari is only possible during a dry season. You can enjoy the game activities by your sides while walking.

If your Tanzania Safari Tour is combined with Kilimanjaro hiking then opt for the high seasons. Because in rainy seasons it is way too difficult to trek the roof of Africa.

Best Time of Year to Go To Tanzania

Lifetime Safaris advice you to visit Tanzania from January to December you can be sure to choose any month and you can still enjoy Tanzania safari, cos every season on the year gives its uniqueness on the safari experience.

And during the wet season is also the best time to enjoy the safari as you get the different feeling of safari and the parks are not crowded with tourists like the dry season. If you are worried about the Tanzania Safari Cost, then go through the Tanzania Safari Packages we are offering. There are many exciting offers there.

5 Action in Tanzania Safari: Action Explore Like a Wanderlust 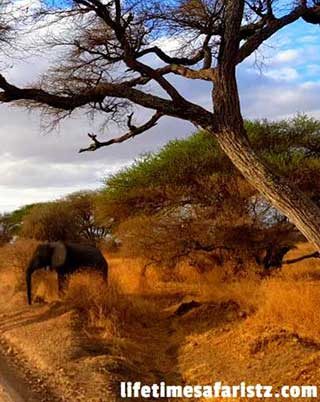