Cheetah Vs Leopard – Know About The Dangerous Animal During Your Tanzania Safari Tours! 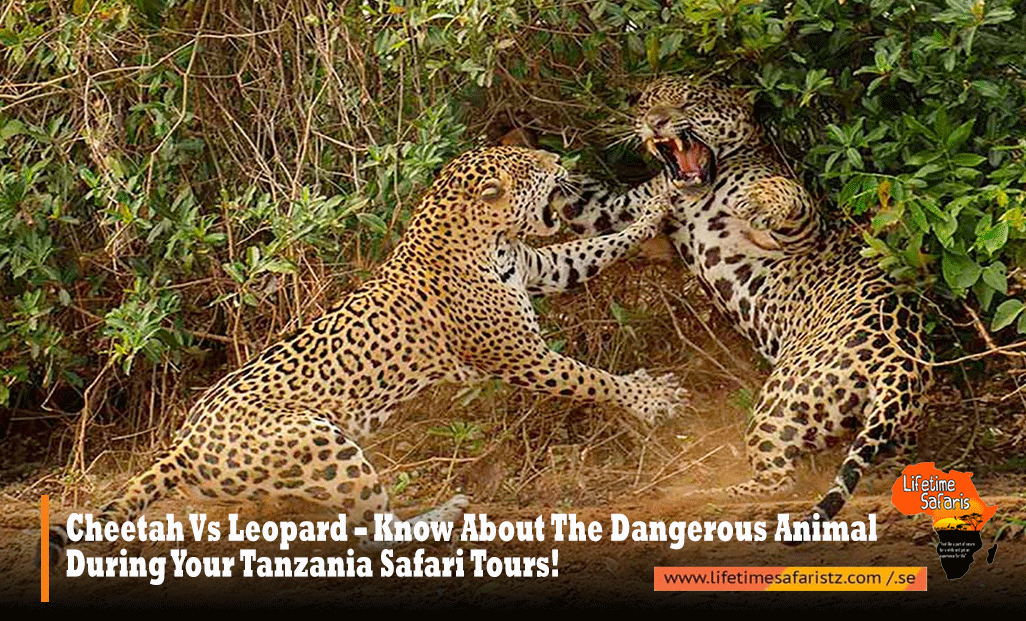 On your Tanzania Safari, you will come across many mammals that are unique in their own way. The most thought-provoking of them however are the leopards and cheetahs which you can watch closely on your Tanzania Safari Tours. Many people often wonder – which is more dangerous mammal than the other – A Cheetah or a Leopard? Read on to find out!

HUNTING STYLE OF CHEETAHS VS LEOPARDS – ON TANZANIA SAFARI TOURS 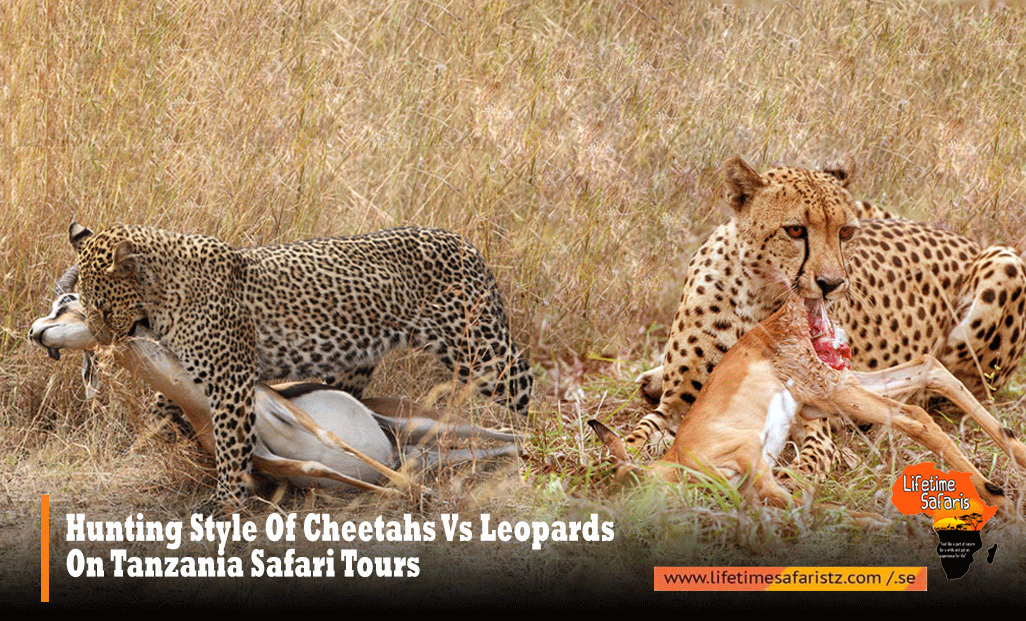 You may observe a cheetah is often seen walking attentively and hiding behind termite mounds or low-lying tree branches from where it can potentially spot prey for hunt. On your Tanzania Safari Tours, you will witness several diverse hunting techniques that these wild animals choose.

While a Cheetah may wait at a vantage point for a group of antelopes to disperse and attack its prey leopards are often seen stalking their prey from a distance. The Leopards then try to get closer to the target and charge intensely at a speed of about 60km/h jumping on its prey and leaving it injured. The Best Time For Safari In Tanzania to witness this action is usually in the dry summer period. Our customized Tanzania Safari Packages that are tailor-made as per your needs provide an amazing opportunity to our clients to spot these prey-predators in action.

CHEETAHS OR LEOPARDS INTERACTION WITH HUMANS – ON TANZANIA SAFARI TOURS 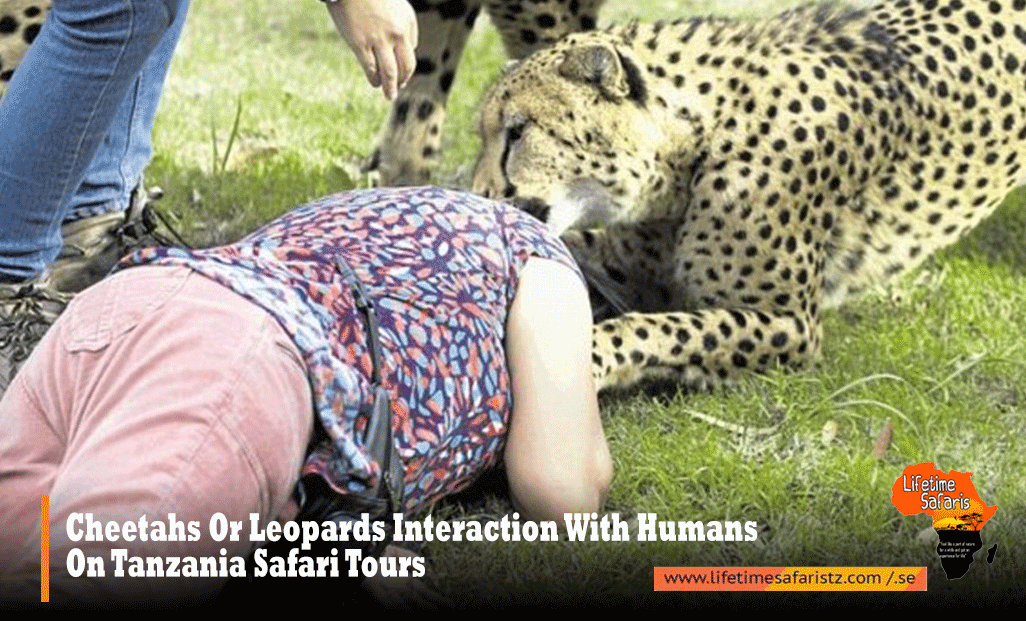 So who are the man-eaters – Cheetahs or Leopards?

On Tanzania Tours and Safaris, you will encounter many visuals that will answer your questions meticulously. Cheetahs are not known as man-eaters; they are far less aggressive than other big cats and have been kept as pets at different points in history including the ancient Egyptian and Genghis Khan. They are hunted by farmers who believe they eat livestock. Although studies suggest that cheetahs rarely do so. Cheetahs are not dangerous to humans unless provoked and some zoos even allow for personal cheetah encounters to raise awareness.

Leopards avoid people and prefer prey to humans. But injured or sickly leopards or those who cannot find prey may attack humans.

In India, one leopard known as the Leopard of Rudraprayag is believed to have killed more than a hundred and twenty-five people while the Pinar leopard may have killed more than 400 people? Although an injury caused by a poacher left it unable to hunt normal prey. Man-eating leopards are bold and will enter human settlements.

Two people in India were killed by Leopards in July 2012?

If an Individual encounters a wild leopard they should stay indoors, if at all possible, and not draw its attention or attack it with stones. Most leopards will ignore humans if left alone. On the Tanzania Hunting Safaris which are the Best Safari In Tanzania, you will discover many such interesting and exciting Tanzania Safari Facts that will intrigue you.

EVOLUTION OF CHEETAHS VS LEOPARDS 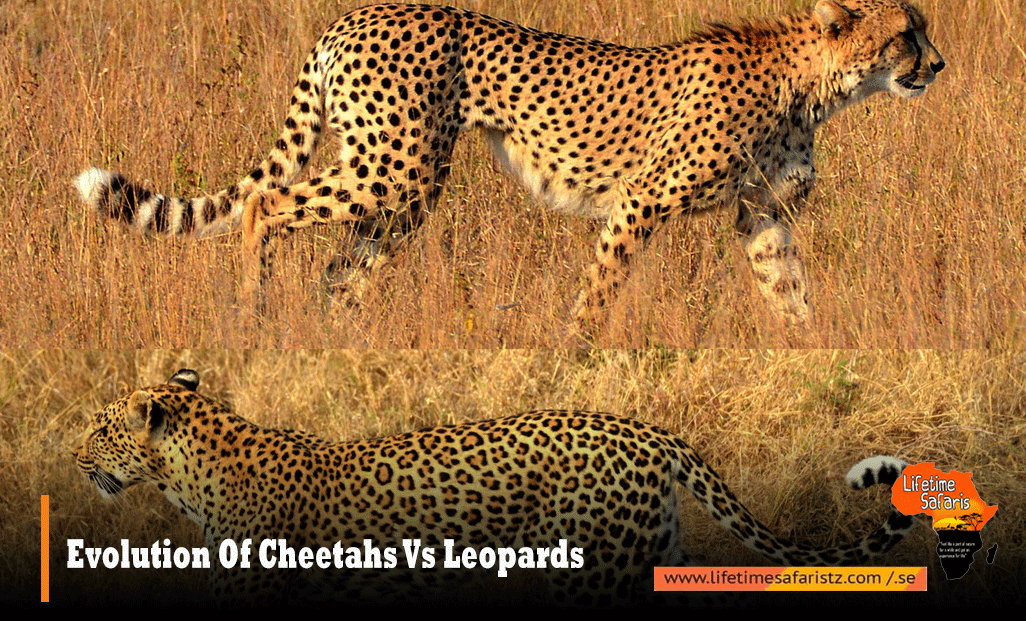 What is Bottlenecking and why did Cheetah’s evolution suddenly stop?

The Cheetah went through a massive bottlenecking event sometime in its past. Basically all Cheetahs today, are related to each other. This is important to understand as their physiology is not as strong as some other cats. They suffer from far more problems as they age. However, they have remarkably adapted to these events and lack only one key ingredient – They don’t Evolve. They are so genetically similar there is nothing from which natural selection can act upon to benefit a differing Cheetah. They are genetically stable and not evolving as a species.

“One beats the other at speed while the latter has transformed massively in the course of generations!”

Leopards, on the other hand, are in a strong evolutionary position, as an ambush predator their teeth are getting longer, in preference to their activity so they can land on top of a victim below, and stab them and stab them with powerful spiked teeth.

SO WHICH IS MORE DANGEROUS CHEETAH OR A LEOPARD?

After analyzing the hunting style and evolutionary standards, we can come to a conclusion that between Cheetah and Leopard, Leopard Is Significantly More Dangerous. Cheetahs are far too Fragile and do not attack humans unless provoked. The Leopards surely run half the speed of Cheetahs which is about 40 MPH but their agility and strength are way better than the cheetahs. Leopards carry antelopes and impalas with weights up to 180 and 200 pounds respectively, up trees, so they can eat at their own comfort. Not just that, they also take on risky prey such as crocodiles and wildebeests. But Cheetahs only hunt smaller preys which run. This is the reason their hunting style is more speed-oriented. Cheetahs take on risky prey sometimes such as ostrich or Zebras but it usually happens when they are in a group which is rare.

The Tanzania Safari Cost is affordable and inexpensive with Lifetime Safaris as we design the best Budget Tanzania Safari Tours to suit the needs of our clients. Do not hesitate to give us a call and clear your queries regarding your trip to this beautiful country. Plan your tour packages with us today!